A tip if you’re ever planning on doing the Rebus Hidden Edinburgh Tour.

Do not, like your friendly neighbourhood Edinburgh Reporter trust that 12:02 is good enough when a 12 noon start has been stipulated on the website, because it isn’t.  The Detective Inspector has already downed his pint with a whisky chaser and strode off –

‘down Infirmary Street and left,’

if the somewhat wobbly folk musician is to be believed (there’s a folk festival on in The Royal Oak this weekend and the bar is being propped up by some very affable but rather inebriated chaps in matching t-shirts).

Running down the road after the tour,

as I and another tardy couple did WILL NOT HELP.  Down to the left in the Cowgate I can see nothing, not even tumbleweed.  Did he mean round to the left a bit but then straight on to the Pleasance?  Maybe, but there’s nobody there either.

The walking tour has vanished.  Rebus’s Hidden Edinburgh is, if anything, hidden too well. 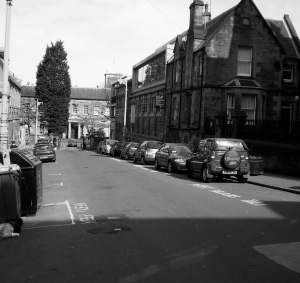 Can you see Rebus anywhere?

The tour is running again as part of the Edinburgh Science Festival on Saturday 17th at 12, starting at the Royal Oak Pub.  Tickets are £10.